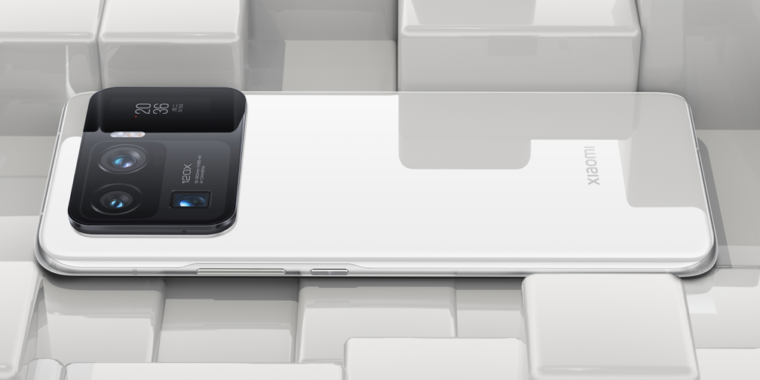 Following a leak in February, Xiaomi’s Mi 11 Ultra went official today. This phone’s main claim to fame is the inclusion of a second display tucked away in the camera bump. Plus, now that the official specs are out, we can see that “world’s largest camera bump” also houses one of the world’s largest smartphone camera sensors, the Samsung GN2.

The base specs are on the high end for a high-end 2021 Android phone: a 120 Hz, 6.81-inch, 3200×1440 front OLED display; a Snapdragon 888; 12GB of RAM; 256GB of storage; IP68 dust and water resistance; Android 11 with MIUI; and a 5000 mAh battery. Xiaomi offers 67 W wired and wireless charging, which, along with OnePlus, is a tier above most other phones. Xiaomi touted the 5000 mAh battery as being a “silicon-oxygen” battery, although the company failed to point to any serious benefit from its new battery formula. There’s also Wi-Fi 6E, which greatly expands the capacity of Wi-Fi by adding 6 GHz spectrum alongside the existing 2.4 Ghz and 5 GHz bands.

On the back, you get a 1.1-inch, 126×294 display with touch support. Xiaomi says the rear display supports an always-on display mode showing the time, date, and notifications. It can also act as a tiny viewfinder for rear-camera selfies. There are three rear cameras, but the big news is that the main camera features a Samsung GN2 sensor. This is a giant 50 MP, 1/1.12″ sensor, with a 1.4μm pixel size and quad pixel binning. The 1/1.12″ sensor size means modern smartphones are finally starting to match the Nokia 808’s hardware, a groundbreaking camera phone released all the way back in 2012. The 808 also had a 1/1.12″ sensor with a 1.4μm pixel size, and despite being 9 years old, it’s still able to stand up to modern devices.

Since the Nokia 808 launch, modern image stacking techniques and newer AI models mean smartphone manufacturers can squeeze more and more photo quality out of a smaller camera sensor. Those are all improvements in camera software, though, and if phone manufacturers would give up on their obsession with thin devices, there are major advancements that could be made in camera hardware, too. There was nothing really magic about the Nokia 808—Nokia just prioritized camera hardware in the 13.9 mm-thick body. Xiaomi seems to have followed a similar strategy—it lists the Mi 11 Ultra at 8.3 mm, but it looks like that measurement is without the camera bump. With the camera bump, the phone looks to be 2 or 3 mm thicker. Samsung isn’t the only company pushing bigger camera sensors—the Sony IMX800 is rumored to be a 1″ sensor.

No phone can go out the door today without multiple rear cameras, so the device is also packing what looks to be standard-issue 48 MP wide-angle and 5x optical zoom cameras, both using the Sony IMX 586.

The camera bump isn’t the only thing special about this phone. The device features a rare ceramic back—a feature we last experienced on the Essential Phone. We can’t say ceramic has any huge benefits over the usual glass back. It’s often said to be more scratch-resistant, but it’s just as prone to shattering. Xiaomi also says the phone’s Harman Kardon stereo speakers (a Samsung brand) are “the loudest in the industry.”