On Sunday, NASA announced on twitter its man-made helicopter Ingenuity survived its first freezing night on the surface of Mars. Ingenuity is a part of Perseverance‘s mission, which primarily focuses on astrobiology, and Ingenuity is planned to fly and explore Mars and gather rocks samples looking for signs of life. 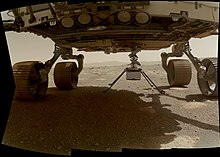 NASA’s Ingenuity helicopter can be seen here with all four of its legs deployed before dropping from the belly of the Perseverance rover on March 30, 2021, the 39th Martian day, or sol, of the mission.
Image: NASA/JPL-Caltech.

Ingenuity has previously been in the belly of Perseverance, a car-sized rover which landed on Mars’ Jezero Crater on February 18. Perseverance charged Ingenuity and kept it warm. Ingenuity left the rover on Sunday, after which the rover moved away to expose Ingenuity’s photovoltaic array to direct sunlight. 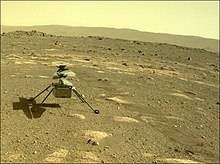 NASA’s Ingenuity helicopter can be seen on Mars as viewed by the Perseverance rover’s rear Hazard Camera on Sunday, the 44th Martian day, or sol of the mission.
Image: NASA/JPL-Caltech.

The NASA-Jet Propulsion Laboratory released a statement saying this was the first time Ingenuity survived the night by itself while being exposed to the planet atmosphere directly. In the statement NASA wrote this has confirmed they have “the right insulation, the right heaters, and enough energy in its battery to survive the cold night, which is a big win for the team.” The temperatures could go as low as -90 °C (-130 °F), the statement said. The helicopter used the energy from its solar array to power a small heater and protect its electronics from the cold.

Mars just has 1% of atmosphere as compared to Earth. Ingenuity’s propeller had to rotate about three times faster for flight on the Martian atmosphere as compared to flying on Earth, ABC News reported. Ingenuity has been designed to be light to make the takeoff easier. Its mass is about 1.8 kilograms. Tim Canham from NASA said “The processor on the helicopter is about 100 times more powerful than the processor on the rover itself”.

The next step would be a blade movement test scheduled for today, CNN said. If successful, it would be followed by first flight test, which can take place by Sunday. That would be the first powered, controlled flight on another planet. Five flights were expected to occur in the next 31 days. If successful, they would be followed by further movement of the helicopter, as it would collect samples of rocks, and collect photos of its observations. Throughout the entire duration of research, Ingenuity would also measure its temperatures and battery recharge performance.

Perseverance rover is to deliver images from Ingenuity to Earth, reportedly a few hours after they were captured. NASA said the rover travelled a distance of 471 million km to reach the crater.