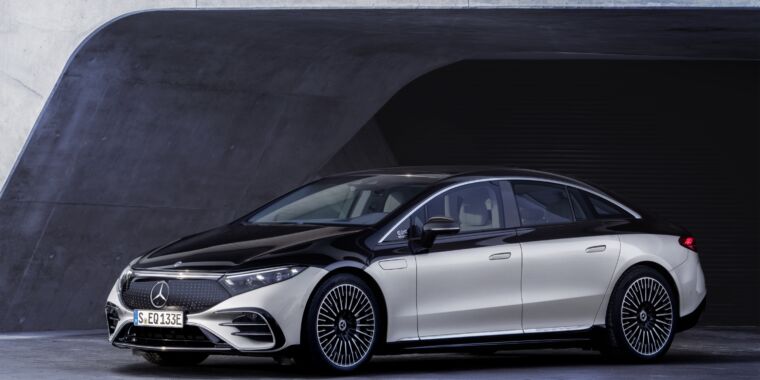 You can tell there should have been an international auto show this week by the flurry of new car announcements. These announcements have already included new battery electric vehicles from Mazda and Audi, as well as a little Hyundai truck that seems to have impressed many. Meanwhile, Mercedes-Benz has taken the wraps off an electric alternative to its mighty flagship S-Class. Actually, let me correct that—it’s the first car from a new sub-brand, called Mercedes-EQ, and the car is called the EQS. And unlike the EQC crossover, this one is definitely going on sale here in the US.

Do not mistake this car for an S-Class with a battery pack and some electric motors instead of an engine and transmission. Although the two cars share technology, the EQS uses a purpose-designed BEV architecture that we’ll see in other, probably more modest Mercedes-EQs. Over in the conventionally powered world, the S-Class has for decades been the car to beat for the title of “World’s Best,” and the EQS is sticking to that playbook.

The EQS has a drag coefficient that might make a Lucid Air driver wonder if someone left a window open. It has a range far in excess of a Tesla Model S Long Range. It can regenerate more braking energy than a Porsche Taycan Turbo S. And the dashboard has been replaced by 56 inches of AI-enhanced data screens. Oh, and did I mention the doors close themselves?

Mercedes has a history of creating low-drag shapes, but the design team has outdone itself here, producing a cab-forward shape that has already drawn comparisons to Chryslers of the 1990s. The EQS has a drag coefficient (Cd) of 0.2, which beats the 0.21 achieved by an EQS startup rival, the Lucid Aid. With a frontal area of 2.51 m2, the EQS therefore has a CdA—the number that really matters—of 0.5 m2.

That astoundingly impressive drag coefficient helped Mercedes-EQ achieve a range estimate (using the European WLTP test format) of 479 miles (770 km). (For context, the Tesla Model S Long Range Plus, which has an EPA range estimate of 391 miles, is rated at 610 km under WLTP.) However, the EQS is packing a lot of lithium-ion to get there: a useable 107.8 kWh in total. (The battery is warrantied to retain at least 70 percent capacity for 10 years or 155,000 miles.)

Mercedes-EQ says that it should only take 31 minutes to DC fast-charge the pack (from 10 to 80 percent state of charge), although that will require a 200 kW DC fast charger. However, the EQS uses a 400 V vehicle architecture, which means that in practice, you might not find any compatible public chargers capable of more than 150 kW.

If that sounds too plebeian, there’s the EQS 580 4MATIC, which adds a permanent magnet synchronous motor for the front axle as well. This version has a combined output of 385 kW (516 hp) and 828 Nm (616 lb-ft), which cuts the 0-62 time down to 4.1 seconds. The 4MATIC powertrain can even regeneratively brake at up to 290 kW, which is higher than the Taycan Turbo and, interestingly, 45 percent higher than its maximum DC fast-charging rate as well.

The massive quotient of screens in the EQS is not a surprise, as Mercedes revealed them in all their 56 inches of glory at 2021’s virtual CES. In fact, it’s really three separate screens with a single bonded glass cover stretching from one side of the cabin to the other. The main instrument display for the driver is a 12.3-inch display. In the center of the dash is the 17.7-inch central display, which uses an OLED panel and haptic feedback. And in front of the passenger is another OLED haptic screen, this one measuring 12.3 inches. This one will also play video content for the passenger, but the gaze-tracking driver monitoring system in the EQS will dim the screen if it detects the driver looking at this screen.

If you don’t want to poke the shiny screens with a fingertip, Mercedes’ Linux-based MBUX infotainment platform features highly effective natural language voice recognition. MBUX also uses AI to learn its driver’s behavior and optimize routes for charging stations and so on.

The Mercedes-EQ EQS arrives in the US later in 2021, and while pricing hasn’t been announced yet, the $110,000 S-Class is probably a decent yardstick before any incentives are taken into account.