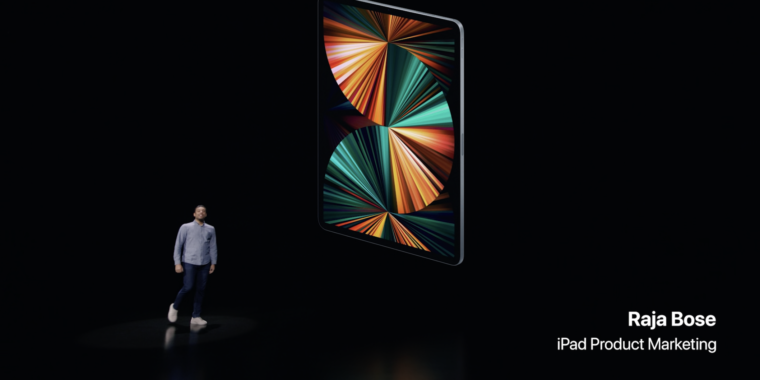 Apple took the virtual stage at its “Spring Loaded” event today to announce an update to the iPad Pro. The big surprise is that the new iPad Pros have the M1 SoC, just like full-blown Mac computers.

The USB-C port is being upgraded with Thunderbolt compatibility, allowing the iPad to power additional displays with up to 6K resolution and other accessories. There’s also optional mmWave 5G onboard. The new front camera is a 12 MP wide-angle lens. A tracking feature called “Center Stage” will automatically crop a video-chat image to keep you in the frame as you move around.

While both sizes of the tablet look nearly identical to their 2020 predecessors, there is one change to the 12.9-inch model that Apple says will make a big visual impression. It features a Mini LED display, an improved variant of the same LCD technology seen in previous iPads. Apple calls it the “Liquid Retina XDR display,” and it has 1,000 nits sustained brightness and 1,600 nits peak brightness. Apple says there are over 10,000 Mini LEDs powering the display backlight, which enables 2,596 local dimming zones and a 1,000,000:1 contrast ratio. The device also supports True Tone, so it will change the white balance to match your lighting environment.

Mini LED displays replace the single LED backlight from traditional CD displays with hundreds or even thousands of small LED lights, allowing more granular control of brightness and contrast and, thus, higher picture quality. Apple previously used the technology in its pricy, pro-focused Pro Display XDR monitor. The 11-inch model does not have the same improvement: its screen quality is likely to be similar to what we saw in 2020.

The 11-inch iPad Pro starts at $799, while the 12.9-inch version with the upgraded display tech starts at $1,099. Preorders start April 30 with availability in the second half of May.