According to multiple reports, India recorded its 14 millionth case of COVID-19 and new infections of over 200 thousand on Thursday, causing multiple hospitals running on full capacity. 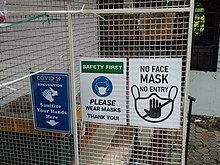 The 200739 new infections is twice what was seen during its last peak in September, rising after the superspreading events such as political rallies in local and state elections and religious events, official complacency and highly infectious new variants of the virus. According to Reuters, the government blamed wilful disregard of social distancing measures and face mask mandates. A Railway Protection Force officer told The Telegraph (Kolkata) “[t]he number of unmasked passengers was much more last month. The renewed surge in Covid numbers has triggered some caution but many are still without masks.”

According to CNBC, India overtook Brazil as the second-most infected country on April 12, though still behind the United States. The new strain has forced hospitals into drastic measures, including two or three patients sharing a bed at Lok Nayak Hospital and converting over a dozen hotels and banquet halls in New Delhi into COVID-19 treatment centres. The states Maharashtra, Madhya Pradesh and Gujarat among others have reported a shortage of oxygen; India Today reported on the Ahmedabad Medical Association pleading the state government for oxygen, writing to Gujarat chief minister Vijay Rupani “[i]f such conditions persist, the death toll will rise, violence against doctors will increase and doctors will be forced to shut down their hospitals due to lack of oxygen supply”.

Nationally, the government has shifted its focus from vaccine exporting to domestic production, entering 114 million jabs in peoples’ arms — the third-most, behind the US and China — and three million on Wednesday after recently approving for emergency use its third vaccine: Russia-developed Sputnik V. The government maintains there is not an oxygen shortage and that the primary issue with distributing inoculations to states is over-planning, not a supply shortage.

New Delhi announced stay-at-home orders and shuttered restaurants, malls, gyms and spas, with an exception for movie theatres at limited times and at limited capacity. Mumbai went further Wednesday, closing most industries, businesses and public places and restricting movement of people amidst a surge of labourers to the city. In addition to many cities and towns, the epicentral city of Maharashtra imposed a curfew, with only essential services open between 8pm and 7am. The Central Board of Secondary Education (CBSE) Class 10 exams have been cancelled, and Class 12 exams postponed.

There has also been 1038 new deaths, adding to the total death count of over 173 thousand and putting a strain on local cremation centres and burial grounds. It remains fourth in its death count after the US, Brazil and Mexico.