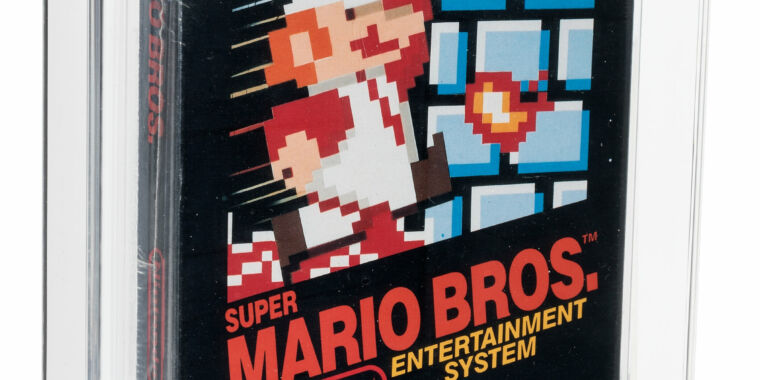 For a while now, we’ve watched as early sealed copies of Super Mario Bros. have commanded six-figure prices at auction, starting with a $100,000 copy sold in 2019 and continuing through a $140,000 sale last year. Those previous sales look downright cheap now, though, as bidding on another sealed Super Mario Bros. has already reached $372,000 on Heritage Auctions.

That price comes after 13 early proxy bids, placed ahead of four days of live bidding for a large lot of comics and games memorabilia set to start on April 1. The bid also includes a 20 percent “buyer’s premium” that will go to Heritage Auctions itself and not the game’s current owner.

Unlike some earlier high-priced Super Mario Bros. sales, this copy isn’t from the earliest production run of the game, which had a box sealed only with a small sticker and which was only sold in New York City during the NES’ late 1985 test-market run. But this copy is one of the earliest shrink-wrapped editions of the game, sold only for a short time in late 1986, according to WATA Games’ guide. This copy also received an incredible 9.6 out of 10 on WATA Games’ quality scale, with an “exceptional” A+ seal in “near-mint” condition. It also still has an intact hangtab, meaning it never had its seal pierced for hanging it in a store display.
To put the current Super Mario Bros. pricing in context, the only known extant prototype of the unproduced Nintendo PlayStation—a unique and important part of video game history—sold a year ago for $380,000 (with the buyer’s premium included). And back in 2014, a “world’s largest” collection of 11,000 video games sold for $750,000.

While this is the oldest shrink-wrapped copy of Super Mario Bros. Heritage has auctioned thus far, others could still exist among the millions and millions of copies of Super Mario Bros. ever produced. Then again, Heritage Auctions video game specialist and consignment director Valarie McLeckie told Ars Technica last July, “I would suspect sealed cardboard hangtab copies [still available today] number in the single digits.”

The current bidding on this sealed box far outstrips the sales record for a single video game. That honor goes to a rare, sealed Super Mario Bros. 3 variant with the “Bros.” portion of the logo positioned on the left, which sold for $156,000 in November.

Sealed classic Nintendo cartridges are in high demand elsewhere in Heritage’s current auctions. An early sealed copy of Mega Man for the NES (which misidentifies the series’ villain as “Dr. Wright”) has already been bid up to $90,000. Meanwhile, a sealed copy of one of the earliest produced editions of Pokémon Red for Game Boy has attracted at $60,000 bid.

“I fully believe that [games] are just as respectable a form of collectible as comics,” McLeckie told Ars last year. “We’ve just now started to dip a toe into formalizing this market. By and large, people are just starting to tune in to the fact that there is a rarity-based system involved.”

“If video games are going to go the way of comics and coins, then there will one day be a million dollar video game sale, and I think [Super Mario Bros.] is that game if that’s going to happen,” WATA Games CEO Deniz Kahn told Ars in 2019.