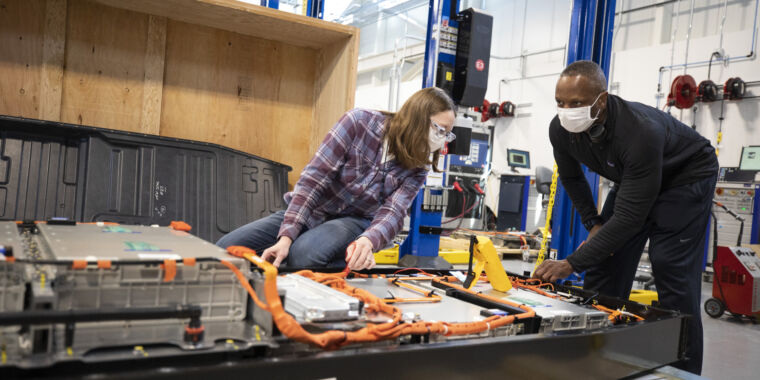 4 with 4 posters participating, including story author

The Ford Motor Company announced on Tuesday that it is creating a new “global battery center of excellence,” called Ion Park, in southeast Michigan. Ford says the new facility will work on all aspects of battery technology development, including manufacturing, mining, and recycling, as the automaker looks to a future in which its electric vehicle battery packs are more vertically integrated.

Ford says Ion Park will have a team of 150 once it’s fully operational late next year. It will join Ford’s new Battery Benchmarking and Test Laboratory in Allen Park, Michigan. That site, which opened in 2020, is where the company tests new battery cell types, similar to the Volvo lab we visited early last year.

Ford says it has already tested more than 150 cells to understand different chemistries and operating conditions at Allen Park.

The new $185 million facility is going to pilot new manufacturing techniques for cell designs and will be capable of producing cells that Ford can take into production for future battery electric and hybrid electric models.

The company was an early entrant into EV technology with its range of hybrids, beginning with 2004’s Escape Hybrid crossover. But it ceded ground to rivals like General Motors, finally introducing the Mustang Mach-E late in 2020.

The electric Mustang crossover will be joined in 2022 by an electric Transit van (to be built in Kansas City, Missouri) as well as a fully electric version of its best-selling F-150 pickup truck, to be built at the Ford Rouge complex in Dearborn, Michigan. Additionally, the company is building a new factory in Cologne, Germany, to produce a high-volume EV for the European market, using Volkswagen’s new modular electric vehicle architecture.