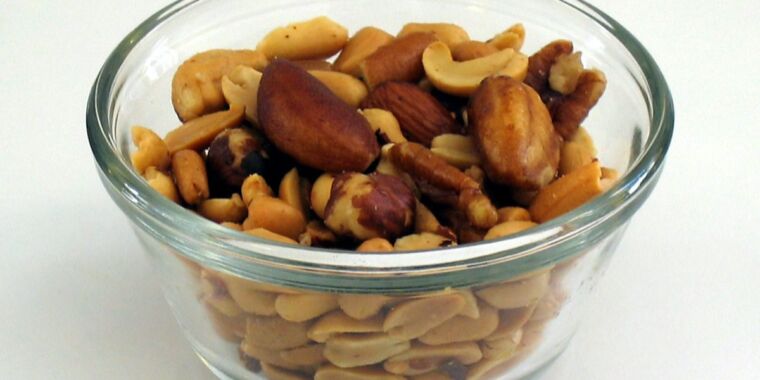 Open a can of mixed nuts, and chances are you’ll find a bunch of Brazil nuts topping the heap—whether that’s a good or bad thing depends on how you feel about Brazil nuts. It’s such a common phenomenon that it’s known as the “Brazil nut effect” (though muesli mix also gives rise to the same dynamics of granular convection). Now, on video for the first time, a team of scientists from the University of Manchester in England has captured the complicated dynamics that cause the Brazil nut effect, according to a new paper published in the journal Scientific Reports.

From a physics standpoint, those mixed nuts are an example of a granular material, like a sand pile. As I wrote at Gizmodo back in 2016, the primary mechanisms behind the Brazil nut effect are percolation and convection. Percolation causes smaller grains to move through larger grains to the bottom of the pile, while convection pushes the larger grains toward the top. Complicating matters is gravity, pulling down on every grain, as well as the fact that every individual grain is jostling against all the others in the container, producing friction and mechanical energy (lost as heat).

In short, the phenomenon is a bit more complicated than it initially seems, which motivates physicists to continue to study the Brazil nut effect. But capturing what’s going on with Brazil nuts as they mix in the can is a challenge. That’s why the University of Manchester team turned to an advanced imaging technique, called time-lapse X-ray computer tomography, to follow the motion of all those jostling nuts as their container was repeatedly agitated.

The Manchester team placed a mixture of peanuts and Brazil nuts inside a shearbox, with the Brazil nuts initially at the bottom. They placed the shearbox inside a CT machine and conducted 181 scans as the shear box shook up the mixed nuts, with one shear cycle between each scan, to create the time-lapse video.

As expected, over time, the peanuts in the mix percolated down, while several larger Brazil nuts gradually rose upward. The Manchester team found it took about 70 shear cycles for the first Brazil nut to reach the top 10 percent of the bed of mixed nuts. Two more reached the same point after 150 shear cycles, while the rest of the Brazil nuts remained trapped at the bottom.

It turns out that the orientation of a given Brazil nut in the mix is the key to that upward movement. The nuts typically start out in a horizontal position, and they won’t begin to rise to the top until they rotate toward the vertical axis. Once a Brazil nut reaches the surface, it will revert back to the horizontal position.

“Our study highlights the important role of particle shape and orientation in segregation,” said co-author Parmesh Gajjar. “Further, this ability to track the motion in 3D will pave the way for new experimental studies of segregating mixtures and will open the door to even more realistic simulations and powerful predictive models. This will allow us to better design industrial equipment to minimise size segregation thus leading to more uniform mixtures. This is critical to many industries, for instance, ensuring an even distribution of active ingredients in medicinal tablets, but also in food processing, mining, and construction.”