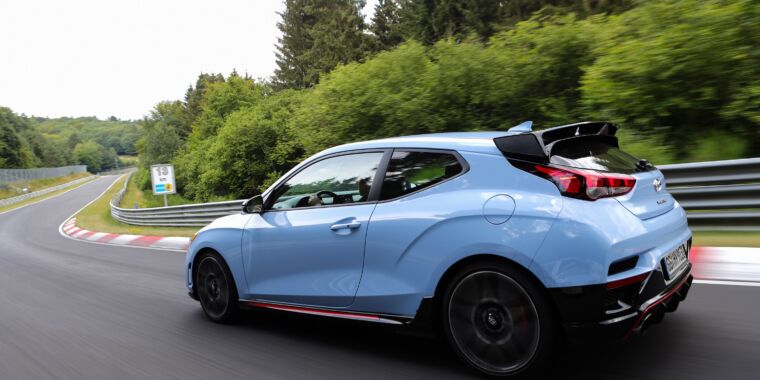 When it comes to sporty hatchbacks here in the US, it has often been a case of “the grass is greener.” For the longest time, Honda wouldn’t bring the Civic Type-R to these shores. And the affordable “it car” du jour is the Toyota GR Yaris, a three-cylinder fun machine that wins over everyone who drives it. Everyone in Europe and Japan that is, because Americans will need to wait a quarter-century to find out how the Yaris handles the Cherahola Skyway, Mount Palomar, or Angeles Crest Highway—assuming you can still buy gasoline to run it.

Well, not this time. Say hello to the $32,250 Hyundai Veloster N, a bonkers little thing with asymmetric doors and handling tuned on the mighty Nürburgring Nordschleife. Shockingly, not only is it on sale here in the US, but it’s not available to our cousins on the other side of the Atlantic.

In 2020, I finally tried out one of Hyundai’s Velosters, in this case, the Turbo model. My conclusion at the time was that the fully loaded Veloster Turbo was let down by its dual-clutch transmission and that I suspected the similarly priced Veloster N would be better. As it turns out, I was correct.

In fact, it’s not just better; it’s one of those cars where you know within a few minutes of setting off for the first time that it’s something out of the ordinary.

For one thing, it gets a different engine from the rest of the Veloster range. Here, it’s a 2.0 L turbocharged four-cylinder that makes 275 hp (205 kW) and 260 lb-ft (353 Nm) that powers the front wheels. This comes with a six-speed manual transmission as standard, which apparently has an unadvertised no-lift upshift feature, but our test car was equipped with what amounts to the only option, an eight-speed dual-clutch transmission (DCT) that, unlike most DCTs, uses wet clutches that help cool the gearbox and reduce parasitic drag. For once, the manual is the more efficient choice, achieving 25 mpg combined (9.4 L/100 km); the DCT is a thirstier 22 mpg (10.7 L/100 km).

Regardless of transmission, all Veloster Ns come equipped with an actual mechanical limited-slip differential, or LSD, (as opposed to an electronic LSD that brakes a spinning wheel) called the “N Corner Carving Differential.” And for model year 2021, Hyundai decided to make the Veloster N’s performance package standard equipment.

My first experience with a front-wheel drive car with a mechanical LSD came when I put a new gearbox in the 1992 Golf GTI that I used to race with some friends, and the difference is illuminating. You can get on the power earlier, and throughout the turn, the diff apportions torque across the axle, stabilizing the car and quelling the understeer that you might normally get from a FWD hatch as you increase the power. The extremely addictive Honda Civic Type-R is another affordable FWD performance car with a mechanical LSD, and it’s partly why that car loves to corner as much as it does.

There is a pair of powder-blue buttons on the steering wheel. The one on the left, labeled Drive Mode, switches you between Eco, Normal, Sport, and Custom. Sport is pretty good, and I spent the first day or so using it and greatly enjoying myself on some empty back roads, until I tried pressing the right-hand button, simply marked with a checkered flag. Good thing I did, as this turns on N mode, which is like Sport but oh so much more. This mode sharpens throttle response even more, stiffens the electronically controlled dampers—to the detriment of ride quality, but you won’t care—engages a more severe profile for the LSD, loosens the stability control safety net, and makes the steering more direct.

I would also like to praise the communication through the steering, which provides plenty of feedback about the amount of grip available to the front wheels. I was sure that the Veloster N used hydraulic power steering, but no; it is an electrical power-steering system, although one that’s different from all the other Velosters in that the motor is mounted to the steering rack, not the steering column.

Sport and N modes also make the Veloster N sound a lot fruitier. Some may turn their noses up because the sound in part comes from the car’s speakers, but so what? It sounds good, and that’s what matters to the driver. (And really, is using a speaker to cancel some unwanted harmonics or accentuate some others really any different from OEMs that fit sports exhausts that add nothing in terms of performance?)

Do your seats light up?

All of this is accompanied by some interior and exterior bits that mark the Veloster N out from lesser versions. At the rear, there’s a biplane wing (or is it a spoiler?), and along the sides, there are more extreme side skirts. On the inside, you get a pair of sports seats that grip you well, and when you unlock the car, the N logos on the backrest light up. Despite this bit of whimsy, the seats weigh around 4 lbs (2 kg) less than standard seats. And the seat belts are the same N powder blue as the steering wheel buttons.

While I’m very impressed with the Veloster N, it’s not quite as good as a Civic Type-R. The Honda’s seats hug you better, the vehicle corners even harder, and it’s about 11 percent more powerful than the Hyundai. But it’s also $5,000 more expensive than the manual Veloster R, and that gigantic rear wing might be off-putting to some. And I’ve been hearing very good things about the Mk. 8 Volkswagen Golf R, but since the outgoing Mk. 7 already cost more than $40,000, the new one is unlikely to be as affordable as the Veloster N.

The Hyundai is not a car for everyone, but for US hot hatch enthusiasts, there’s finally a great option that we get but Europe doesn’t.