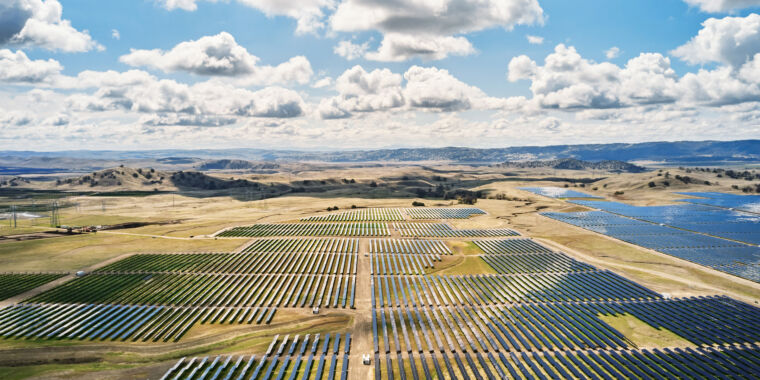 Apple announced Wednesday that it will build a “grid-scale” energy-storage project in California capable of storing 240 megawatt-hours of energy. The storage will work closely with the 130-megawatt solar farm the company already built to power daytime energy needs at its headquarters in Cupertino. Additionally, Apple says that 110 of its manufacturing partners are moving to 100 percent renewable energy as part of a commitment by Apple to make its supply chain and products carbon neutral by 2030.

The project is intended to store energy so the energy produced by the solar farm can be used during the night as well as during the day, and Cupertino says the project will store enough energy to “power over 7,000 homes for one day.” Apple plans to share some of what it learns from the project with other companies, executives have said.

Apple’s own corporate footprint is already carbon-neutral, the company says, but it will be a longer and more challenging road to bring its various manufacturing partners and suppliers along with it. Apple’s newsroom post offers details about how Apple works with suppliers to reduce their carbon footprints:

Sharing the experience gained through Apple’s own transition to 100 percent renewable energy with its suppliers, the company introduces suppliers to resources and training materials with country-specific information to guide them in their transition to renewables. Apple also educates suppliers through advanced and customized training with leading experts. And the company supports the creation and growth of renewable energy industry associations that its suppliers can join to learn about local opportunities.

Apple then describes the Clean China Energy Fund, which it says it created to “invest in clean energy projects totaling more than one gigawatt of renewable energy in China.”

The company says it believes it has the relationships and leverage to encourage suppliers around the world to move forward with plans to limit their environmental impact. “We have the advantage of having long-standing relationships with them. And we also have the advantage of having purchase power with them. And so between the two, I think that has led to some really lovely collaboration,” Apple environmental policy VP Lisa Jackson told The Independent in an interview.

This energy-storage and supplier-commitment announcement comes just a few days after Apple announced a $4.7 billion “Green Bond” spend on clean energy and carbon emission reductions. And a few weeks further back, Apple revealed in a financial filing that it will tie executive cash bonuses to metrics related to the company’s stated social and environmental values.

Apple has invested significantly in recycling programs, renewable energy, and other environmental initiatives of late—sometimes to the frustration of consumers and sometimes with additional motives. For example, the company announced that new iPhone shipments would not include chargers, so as to streamline the shipping process and reduce waste, claiming both of those optimizations would reduce the products’ negative environmental impact. But the company decided not to lower the price of the iPhones, thereby slightly increasing Apple’s own margins on the product.

This move was lauded by some and lambasted by others. In some regions, consumer watchdog groups fought fiercely to force Apple to include the chargers anyway, arguing that the eco-friendliness of the change had been overstated. When we analyzed Apple’s decision, we posited that it would indeed reduce negative environmental consequences related to the products, but we also noted that Apple was passing the cost of that change to consumers, and that there are other, bigger things the company could do that it has thus far declined to address.