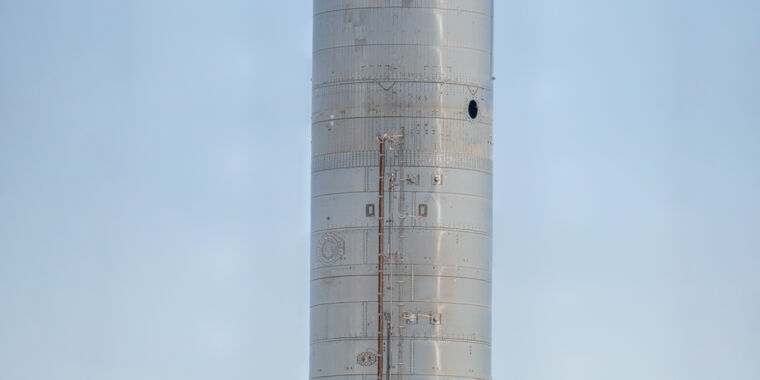 SpaceX appears set to fly the latest prototype of its Starship vehicle—dubbed SN11—as early as Friday afternoon. Local residents have been informed of the test as part of a mandatory evacuation of Boca Chica Village.

This test flight to about 10 km would be the fourth attempt by SpaceX to launch a full-scale version of its Starship vehicle to a high altitude and then land it. During the first two attempts, the vehicle failed just before landing, resulting in a crash. During a third flight, on March 3, the vehicle landed and stabilized itself but then exploded about 10 minutes later due to a fuel leak.

The latest Starship prototype has come together quickly. It rolled to the launch pad on March 8 and underwent its first static fire test on March 22. During this test, one of the three Raptor engines apparently misfired, so it had to be replaced. Once this was done, SpaceX completed a second static fire test on Friday morning.

Following this test, a preliminary data review apparently gave the launch team enough confidence to move ahead with a flight attempt later in the day. The launch window extends until 8 pm local time in South Texas, or 01:00 UTC on Saturday. Local sunset will occur around 7:45 pm.

SpaceX has a lot riding on this test flight, given that it is the fourth time the company will have attempted to demonstrate both in-flight control of the large vehicle and the ability to bring it to a safe landing. Failures are expected with such a hasty development program, but sooner or later, the company would like to actually land Starship and move forward with the program.

The launch comes as SpaceX is nearing completion of the first prototype of the Super Heavy booster, which will be used to launch Starship into orbit. The first version of this rocket, BN1, will not fly but instead serve as a demonstration vehicle to be moved to the launch site and tested with ground support equipment. The next booster, BN2, is expected to fly and may do so later this spring.

SpaceX would also like to be able to demonstrate success with Starship to NASA, which in about one month is expected to select two companies to move forward with versions of a Human Landing System as part of the Artemis Moon program. SpaceX, with its Starship vehicle, is among three bidders—alongside Blue Origin and Dynetics—and is the furthest along in developing actual hardware.