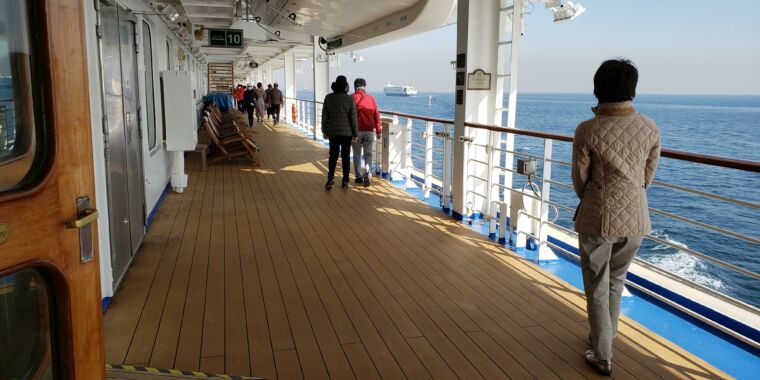 Filmmaker Hannah Olson might be the only person to ever have two world premieres at South by Southwest while never having her work shown on a single screen in town. Back in 2020, Olson was ready to bring Baby God, her HBO documentary on the fallout from revelations about disgraced fertility doctor Dr. Quincy Fortier. But then March 6, 2020, happened—the city of Austin declared a disaster and effectively cancelled SXSW for the first time in the event’s 30-plus-year history.

“The pandemic became very real for me very quickly because my premiere was canceled on March 6, 2020,” Olson tells Ars. “So at that point, I felt very strongly I wanted to pivot… and I started looking closer at these people stuck on a cruise ship out in Japan.”

Just like that, Olson had unexpectedly started on her second feature documentary before her first had even debuted.

Two months earlier, in January 2020, Olson had traveled to India on vacation. Moving throughout Asia then, she quickly became aware of the uneasy spread of a novel coronavirus throughout China long before the situation landed on the radar for many Americans. But it was the February 2020 news reports about this virus being discovered on a cruise ship docked in Japan that really captured her attention.

“I’m a news junkie. So whenever I read a news story, I’m looking for people’s Facebook profile or social media profiles,” Olson recalls. “‘OK, who are these people?’ I started looking on social media thinking, ‘Maybe if they were on the ship, they were still posting to Facebook.’ Through social media, I started finding this enormous trove of footage—people on every deck recording their lives around the clock: the crew, the passengers. I just started collecting, and I eventually reached out to people to hear their stories.”

The result, Olson’s new documentary called The Last Cruise, debuted sans Texas screens as part of SXSW Online 2021 (the film hits HBO Max on Tuesday, March 30). Built largely upon an impressive cache of eerie home video, it’s a gripping, frenetic, first-person view of one very trying month aboard the Diamond Princess cruise ship as it docked in Yokohama, Japan. This real world exercise in found-footage horror could very well be the most unsettling, anxiety-inducing ~40 minutes you watch all year.

The Last Cruise takes viewers back to January 20, 2020, when only four confirmed cases of COVID-19 existed outside of China. For anyone who’s ever dared to step on a cruise ship, the opening scenes will look familiar: older travelers living out their global dreams on small daily excursions, packed halls watching stage performances, everyone taking selfies as they look out onto the ocean at night.

Olson uses these “before times” to introduce a wider range of experiences than that, however. She connects with not only American tourists but with Indonesian workers on the ship’s crew or kitchen staff, the Italian doctor overseeing the ship’s medical resources, a ship performer, and a pastry chef. All of these people seemingly have their cell phones filming constantly, even if it’s just to say they’ll be wishing good health to family and friends in this new year.

“As much as this film is about the early days of the COVID crisis, it’s also about the way we narrate our lives—people were filming and taking photos the entire time, guests and crew. So what happens when your vacation photos become plot points in some real-life horror movie?” Olson says. “What happens when your vacation photos become part of something larger, become part of an international news story? [During production] I felt like I was looking at evidence—evidence that the government seemed to know more than they were letting on. I watched US government officials enter the boat in hazmat suits—well, OK, this isn’t matching what I’m seeing here [back in the US].”

Without spoiling any of the astounding moments captured from multiple vantage points, it suffices to say that viewers are simply along for the ride in The Last Cruise. Though bringing in a lot of post-cruise or wider-world perspective would have been easy, Olson eschews sit-down interviews with US and Japanese government officials or health experts. Or, more accurately, she did those but ultimately decided to leave such detail on the cutting-room floor: “I wanted the film to mimic the feeling of being on the ship, and no one on the ship was talking to experts. No one on the ship had information,” she says. “Other films are going to do that. We will have no shortage of expert commentary on COVID. I wanted this film to be an experience.”

Because of this, The Last Cruise maintains an almost claustrophobically narrow viewpoint focused solely on this ship at this point in time. Passengers, crew members, local health officials, and numerous onlookers come to terms with the terrors of COVID-19 in real-time, small bit of information by small bit of information. Watching the movie more than a year after the events, of course viewers have more perspective, but that only makes seeing the utter lack of information and urgency unfolding all the more anxiety-inducing. The Last Cruise reminds us concepts like asymptomatic spread or maxed-out hospital capacity were not always universal knowns.

“I do wonder how interested people will be in watching a COVID documentary as we’re still living in it,” Olson says. “Going into making this, in February and March last year, I kept thinking, ‘Is it too soon to make a film about COVID? We don’t know the end result.’ But I knew I’d be interested in the origin story and that the first outbreak outside of China would remain relevant and have lessons to teach us.”

“It doesn’t make any sense”

Beyond being a captivating chronology, The Last Cruise also shows that many of the greater societal challenges COVID-19 has surfaced over the last 13 months existed long beforehand. The unequal toll of this health crisis along class and racial or ethnic lines becomes literal quickly on the Diamond Princess as being “quarantined” really only applied to guests. Crew members share footage and memories of still living in close (unmasked) quarters and being required to carry out ample (and unmasked) tasks to keep the ship operating while docked. The hokey, HR-speak ship motto—”One Team, One Dream”—becomes a driving force in the downfall of many crew members.

“We couldn’t just stay in our rooms; the crew had to keep the ship going,” an American performer named Luke says in the film. “Answering phones, delivering medications, cleaning for 12 hours a day… We were delivering 3,000 meals, three times a day, to all the guests. We were put into harm’s way, but in the moment that’s all we knew how to do.”

The lack of transparency around handling the virus on ship in The Last Cruise also mimics similar issues that would reveal themselves within organizations everywhere from employers to governments to schools. It wasn’t until Day 23 on board that a crew member broke the ship’s policy banning talking publicly about work in order to bring to light the unsafe conditions being forced upon staff. Medical officials appearing in documentary footage seem to convey almost no context to the people they approach, whether those individuals display COVID-19 symptoms or whether they’re bystanders wondering about others or when they might get home.

“It’s the whole experience but small,” Olson says. “You have the rich people staying in their room and the crew becoming essential workers, and no one has any information. All the news outlets early on were reporting that the ship was in quarantine, but all the footage I saw on Facebook from the crew members showed them continuing to live and work in shared quarters, not in quarantine. How can we talk about that as quarantine? It doesn’t make any sense.”

The Last Cruise will simply horrify viewers with what’s unfolding before their eyes while simultaneously nudging everyone to contemplate the larger issues this ongoing pandemic regularly forces society to grapple with. It may be less grim than many of the other COVID-19 documentaries that take audiences inside hospitals or keep the overall death count front and center, but it’s no less of a shake-you-to-the-core, sober viewing.